Also, we cannot afford to do blinded, placebo-controlled clinical trials. Accordingly, although there are decades of clinical data indicating notable safety and efficacy over decades of patient-years, in the absence of a 6 months trial (costing $millions) RCH4 must still be considered as an unproven treatment.

Note: These paragraphs are not intended to be a scientific discussion but a conceptualised broad overview for the average reader.

This new ALS drug targets a newly found agent (“defect”) in the immune system. The fact the the drug, a type of molecule somewhat similar to a monoclonal antibody and reported to be safe, fixes that defect is now certain and undoubted. However, there may other unknown antagonistic agents involved.
The defect is also certainly a factor in the promotion or stimulation of ALS, however it may not be the only defect. There may be others as the aetiology is not clearly understood.

TO REWORD
In essence, the extensive evidence that this new drug which targets dysfunctional lipid rafts is effective in slowing the disease progression across the entire severity spectrum of ALS including both sporadic and familial cases, proving that it targets the primary initiating mechanism of the disease process.

A specific B-cell sub set was identified as the source of the newly recognised agent (operationally termed MRCH) which, in turn, upregulates the expression of a protein, which in excess, is excitotoxic. The B-cell sub set lipid raft receptors were characterised and a molecule developed which recognises that receptor and nothing else - therefore indicating a notably safe Mode Of Action (MOA) profile. This has been confirmed after very many decades of continual-patient-years treatment.

Patient taking RCH4 are asked to send a report on a monthly basis providing their ALSFRS-R score. A peer reviewed paper confirms that self-evaluation of the ALSFRS-R score concurs almost precisely with the same evaluations done in clinic.

Monthly monitoring reports are submitted to us by all our PALS friends. This monthly information comprises of 6 health parameters. One of these parameters is the ALSFRS-R score. This is an ongoing record of points allocated to 12 questions. As every monthly report form is submitted, the information is automatically picked up by a database and the statistics updated in real time. All interventions known to aﬀect the course of disease (e.g., NIV, Trach., gastrostomy, etc.) are tracked. The monthly monitoring reports also track the drugs and all dietary supplements taken by PALS who are being treated with RCH4.

We therefore maintain a very accurate analysis of each PALS, enabling pro-active ongoing management of their RCH4 treatment if possible.

Based on PALS monthly report we know that:

It should be noted that although the ALSFRS-R score is the gold standard for decline measurement, it does not include factors such as get-up-and-go, strength etc. It should also be remembered that the ALSFRS-R score may not reflect loss of motor neurons.
However, it is logical and true to observe that, for example, if the ALSFRS-R score does not change, then end of life would be due to something else - or extreme old age.

Efficacy evidence of RCH4 in slowing the progression of ALS, independently reported by PALS themselves, can be seen bellow. 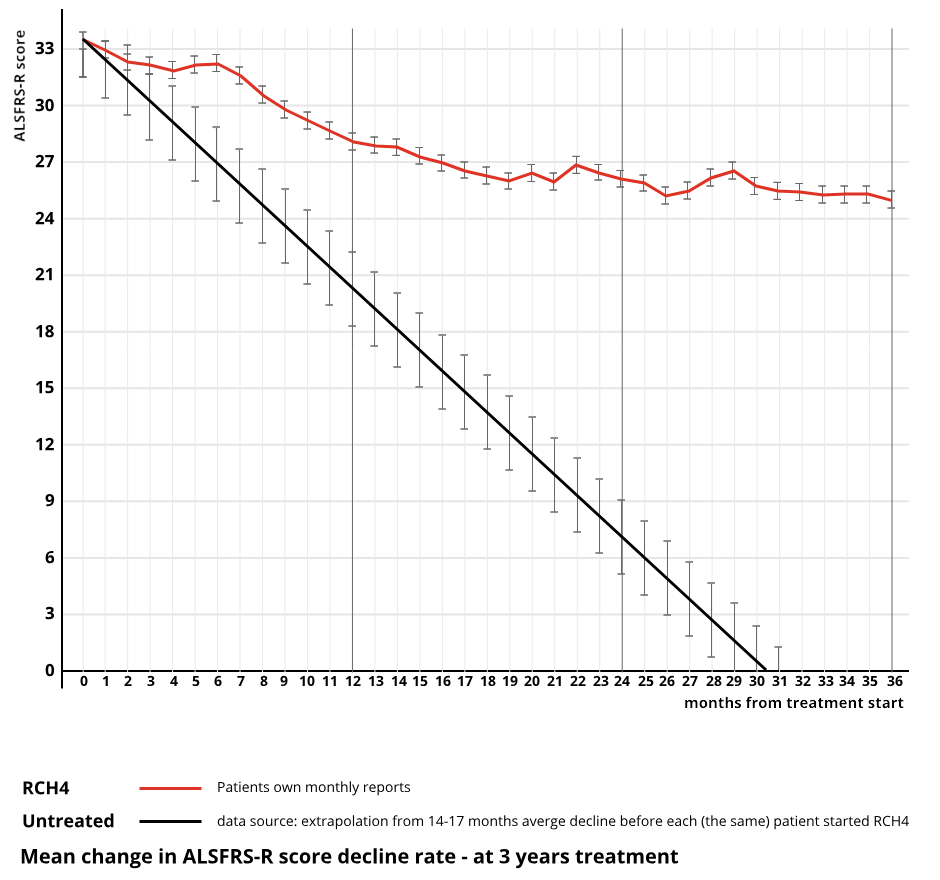 Although RCH4 has an outstanding safety record and no notable related side effects have ever been reported to date after decades of continual patient-treatment-years, there is always the potential for side effects with any drug.
You would take RCH4 entirely at your own risk.

There is no cost.

We provide this ALS drug free of charge as a humanitarian imperative.  You are not required to contribute anything. We pay for it ourselves if we have the funds available.
Therefore availability may be intermittent.

This is an Investigational New ALS Drug which does not have health Regulatory Authority marketing approval in any country.  The only legal way to get access to any drug is:

Also, before we start with a new patient, we must be sure that we will have sufficient supply of the drug to reliably provide treatment for the new patient for a long time. Existing PALS must have priority.​ Accordingly we can only accept small numbers of patients.

If we could, we would supply anyone who would benefit.

There is also the fact that it can take up to 4 months to have each batch manufactured and we must have the funds to pay the Pharmaceutical drug manufacturer in advance. Their minimum production run order keeps our existing PALS friends supplied for over one year.​ The only way forward to make it permanently available worldwide for everyone, will be the involvement of a Pharmaceutical company or PALS themselves set up their own commercial entity to obtain Regulatory Authority marketing approval for their own medical and financial benefit.

Comparisons with other treatments

At 6 months of treatment

At 3 years of treatment 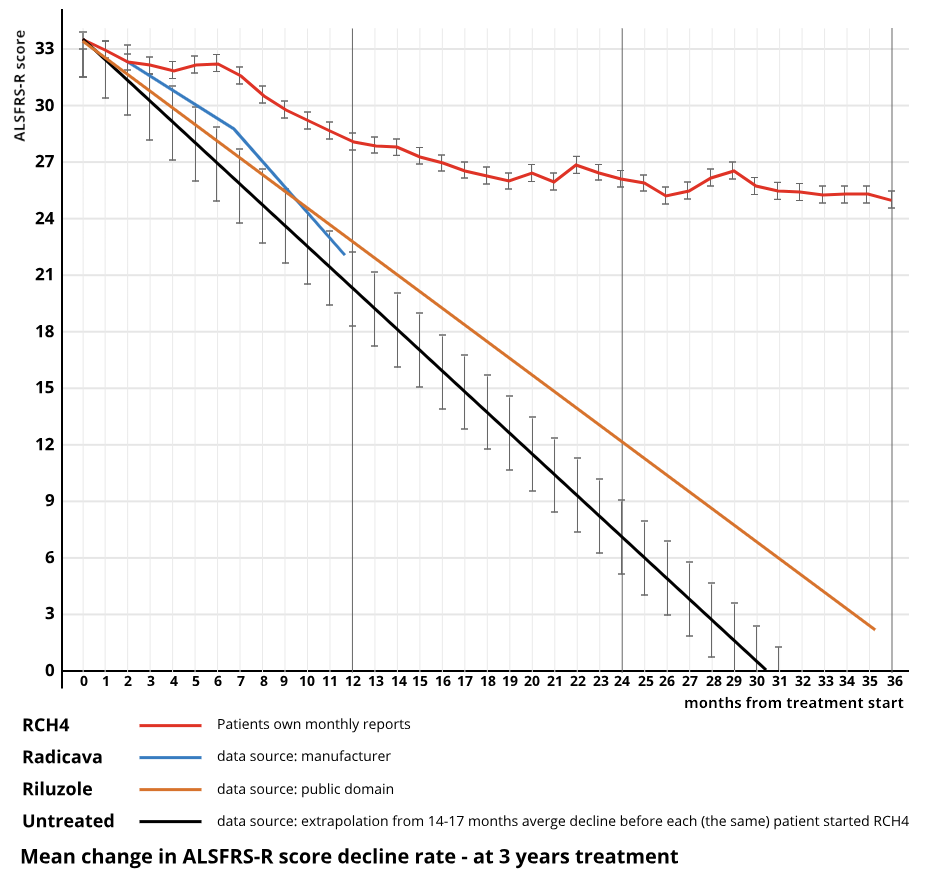 Riluzole™ was originally used in a photographic developing solution, and later as an industrial bleach. It was accidentally screened in an in-vitro assay of glutamate inhibition and found to be slightly effective.  The first approved ALS drug `Riluzole`™ (Sanofi Aventis) may not slow the progression rate sufficient to reflect in the ALSFRS-R score. It extends “time to tracheotomy” by 75 days + - 15 days (Source: Sanofi). This data emanates from a very large study of some 900 ALS patients. Extended time to tracheotomy does not necessarily equate to life extension. It does not appear to slow the progression of ALS. Slowing or stopping the progression does equate to life extension - provided that infections or other events are avoided. As far as is known, no ALSFRS-R decline charts have been published for `Riluzole`™ by the manufacturer.

Radicava™ (Mitsubishi Tenabe Japan)  (also known as Edaravone) is a form of Pyrazoline, (of which there are many derivatives including Edaravone) an industrial laboratory reagent used in synthesis of peptides and making experiments more sensitive. It is used to treat stroke victims. It is the second ALS drug to gain marketing approval in the USA. It slows the progression of ALS by 33% for six months and is effective in 7% of PALS (Data 2016 Source: Mitsubishi Tanabe). It was approved in USA after a small 6 month clinical trial in selected patients in Japan that met a specific exclusion criteria. In 93% of PALS it had no efficacy in earlier trials. A follow-on trial of 12 months duration failed to show any statistical significance of efficacy[1]. Application for approval in Europe was withdrawn in 2019.

Radicava after one year treatment chart 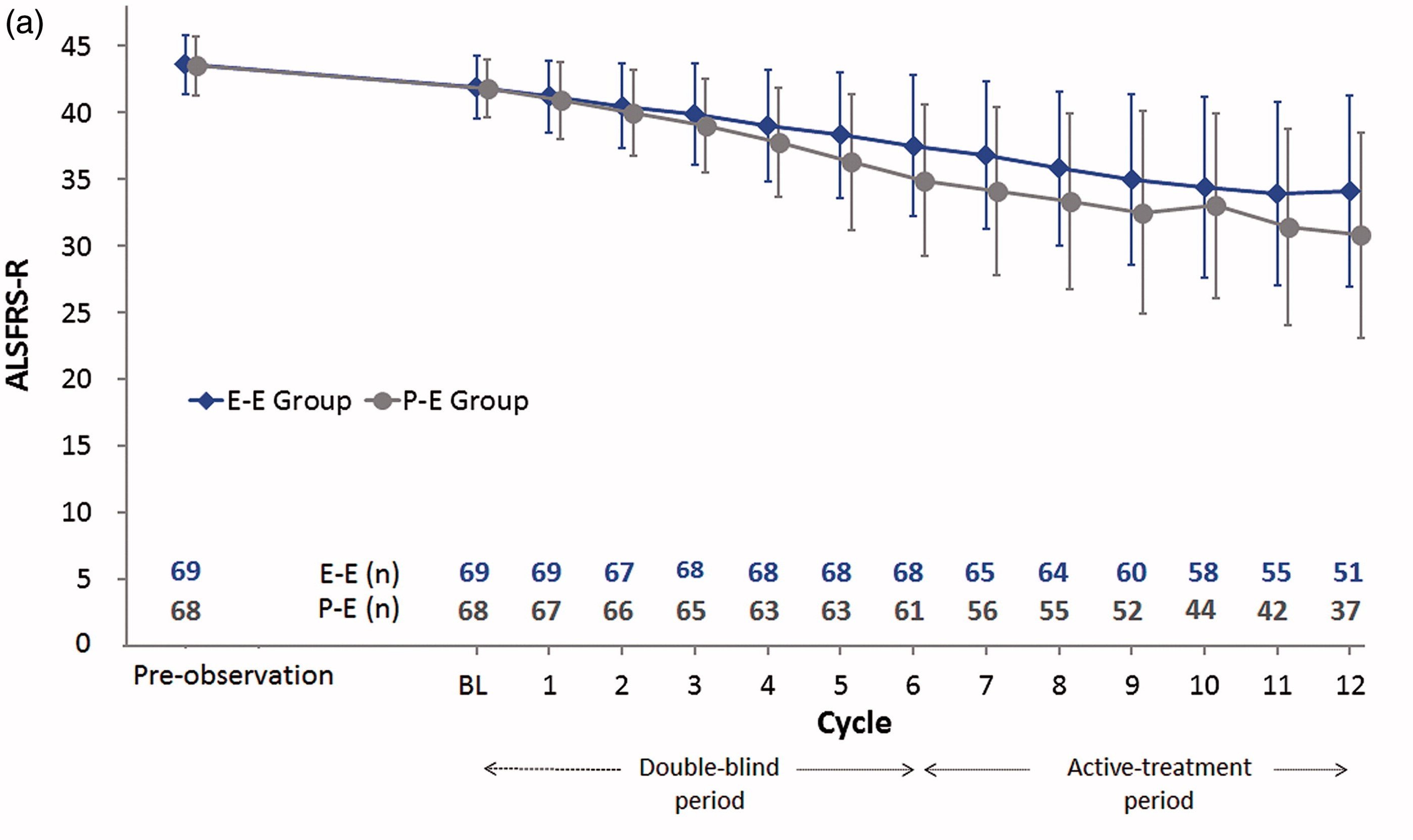 The error bars all overlap. No statistical evidence of ALSFRS efficacy.

RCH4 is the first and only drug developed specifically for ALS. It slows the progression of PALS by 63% (non-responders included, 70% slowing of progression when the 16% non-responders are excluded) and is effective in 84% of PALS over the whole treated population[1]

RCH4 does not have Regulatory Authority marketing approval as we do not have the millions needed to gain approval. As a charity, PALS treated with RCH4 are not selected or subject to any exclusion criteria as it is done for clinical trials. Everyone asking for help is accepted if possible. Prior careful selection of candidates for clinical trials who are likely to do better, skews efficacy data in favour of the drug being tested in the trial - which can be misleading. RCH4 is provided as a charity, not a clinical trial.

each question is expandable and will be comparing Riluzole, Radicava and RCH4